Andreas Schröder grew up in China, Switzerland, Japan and Germany because his father is a diplomat. He got used to traveling early on, and his passion for travel fuels his engagement in the field of transport, both professionally and in his free time. “I speak English, French, German, Swedish and Kölsch”, Andreas smiles, since he was born close to Bonn, he jokes about the local dialect.

The passion for traveling has spilled over into his professional interests in energy, environment and transport. After a Bachelor’s and Master’s in Economics, he went to Brussels and then had a traineeship with the European Commission. “I love Europe, I am a strong supporter of Europe,” he shares. Andreas continued with his PhD at the German Institute for Economic Research, next door to the Hertie School of Governance. One of his PhD supervisors, Prof. Claudia Kemfert, is a professor at Hertie School. The PhD was quantitative, he researched modeling investments in electricity markets, “I have learned critical information I would not know otherwise”, Andreas says about his research. 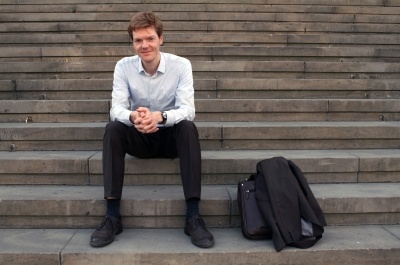 After his PhD, Andreas had a job in Hamburg and Stockholm. The regular commuting turned out to be a pleasure for him. “Ever since I was a child, I loved trains and gazing out the window, to observe the landscape and think about things. I suffered during the railway strike, so this also motivated me to be active in my railway association, in order to improve the lives of the passengers”, he shares. “Berlin is a network city for me, not my home”, Andreas says. The Hertie Energy and Environment Network (HEEN) workshops and the meetings of the Railway Passengers Association take place in Berlin, at the Ministry of Transport, close to Hauptbahnhof. „I dealt with the rights of the passengers, punctuality and reimbursement”, he shares. He does not shy away from taking on additional roles in his community. Andreas was also a part of the Community Board of an evangelical student residence, where he coordinated 75 students and volunteers.

His work with HEEN started with an invitation by the network, to share his expertise as a speaker at one of the regular network’s events. After becoming a member, his involvement with the network grew as he took on the role of a coordinator. “I was impressed by the network and I also like to grow outside my regular job”, he says. “It is important to keep the participants in the network active, because the bigger your network is, the more you can achieve”, Andreas shares. “We organise more than workshops; in the beginning we organized different speakers for our workshops, but today we want to become more professional, so we constantly increase our scope and our geographical reach; we foster exchange and openness”, Andreas says.

When asked about ways to combine his regular job with his responsibilities in the fellows & friends network, he emphasizes his organizational skills. “I was working a 9 to 5 job over many years and I am well organized: Once home, I work for HEEN, which keeps me energized in addition to my regular job”. After having built his expertise in the field of energy with Vattenfall in Sweden, he worked as a Senior Analyst on natural gas markets in Düsseldorf. “It is a very political market; energies are being traded on an everyday basis; I analyzed these markets and I gave recommendations to traders; one can anticipate market movements”, he shares. Today, he works for the International Energy Agency in Paris. Some parts of his work also overlap with his focus at HEEN – the role of gas in Germany.

But the secret to his multilayered work goes beyond a thorough schedule: “We have good people in our network, motivated, enthusiastic, curious like me. My peers are like-minded”. The peer support of the network, and the support of the Hertie Foundation fosters further growth of the network. “We are all striving to save the world, shape the debates, make the world more sustainable, and we certainly do this, at least indirectly”, Andreas says. And it is also about keeping people on board, through a sound structure. Andreas estimates that around 70 % of the members come from the Hertie School circles, 5 % from other programmes of the foundation and 25 % externals. The network offers mentorship for further career building, besides the regular networking events, which is also a core aspect of Andreas’ work at HEEN. The borders between his job and his work at HEEN become blurred. Andreas’ world seems to be a web of networks, be it a railway or professional one. And at the core of it all, he continues to shape his society on many levels.