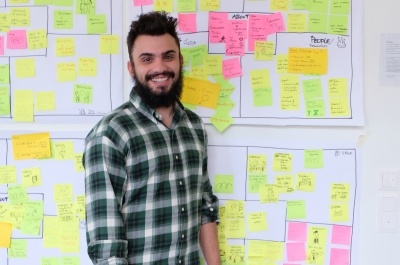 After a study trip to the prestigious Yale Law School, Bruno was in the process of asking professors for letters of recommendation to pursue a degree at that American institution. However, partly because his wife was reluctant to live in the provincial university town of New Haven, Bruno also applied for a DAAD scholarship for the Master of Public Policy program at the Hertie School of Governance. The program appealed to him because of his interest in public and administrative law which he had studied at the University of São Paulo and the Fundação Getúlio Vargas.

Starting with his work in Brazil, Bruno’s research has always been qualitative in nature. By the time he was pursuing his master’s degree in Berlin, however, he felt disillusioned by the realization that his research would only reach a limited audience – a problem he summarizes as “nobody reads reports.” For their thesis, he and two other students therefore decided to produce a documentary on the role of ecovillages in the Brazilian agrarian land reform. Based on their experiences during their thesis project, they developed OndaPolitica, an NGO that aims to present research in the field of public policy to a wider audience by using innovative methods.

I never felt as if I had done enough.

Since his graduation in spring 2015, Bruno has been very busy with developing the work of OndaPolitica, initiating the Hertie Social Impact Collaborative, and starting a family. Looking back, he remembers that “there was always so much going on; I worked all day long.” This changed when his daughter Teresa was born. At first, he says, “working times were a mess because you had to deal with the fact that you cannot maintain much of a schedule anymore.” With an infant being part of his and his wife’s lives, Bruno aims to “adapt more by having a traditional routine.” In addition, he feels that “Germany has changed me a bit,” in that he now appreciates a more defined work-life balance. Before he had a baby, Bruno says “I never felt as if I had done enough. Now, I’ve become more relaxed.”