Along with her “partner in crime”, Dominique Golle, Cosmina Radu was thinking about co-founding an institute for digitalization a few years ago. It was then, when they pitched this idea to the former director of the Berlin office of the Hertie Foundation – Mr. Michael Knoll – who recognized its value and re-directed the two of them to fellows & friends, a programme of the foundation. Inspired by the book “Lean In”, Cosmina, a graduate of the Hertie School of Governance, believes in taking action: “go for it, be the change you want to see in the world”, she sums up. “Sounds corny, I know” – she adds, “but it’s true”. Driven by this belief, she went on to set up, not just one, but two fellows & friends networks: Hertie Network on Digitalization (HNOD) and the Women Leadership Initiative (WLI). 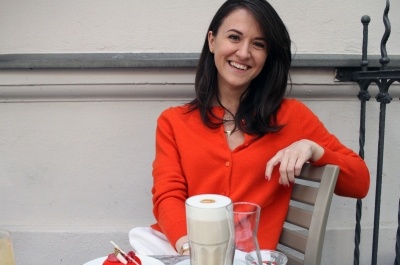 “The networks started small and grew organically”, she describes their evolution. This engagement requires strategic planning especially during the yearly fellows & friends Summit, when the networks had parallel sessions. “I had to run between rooms, in between introductory rounds of each network”, she laughs when she remembers, “positive thinking kept me going”. “You also have to enjoy great ideas”, she says, “the foundation sees the relevance of our networks”, Cosmina points out. Both networks offer spaces to exchange ideas. HNOD focuses on connecting experts from the digitalization field to students and young practitioners in the field, while WLI focuses on empowerment, “we fight for gender equality and gender balance in each line of work and making change happen in our environments. It’s all about taking initiative”, Cosmina shares. “At our network meetings, we share tips and experiences along specific topics and how to create change in our personal and professional environments. An exciting example of the positive effects that our networks’ meetings have had was to hear that some of our network members called their HR departments after our workshops and discussed ways to improve the gender disparities in their firm. In subsequent meetings they shared their stories and thanked our network for giving them the ‘nudge’ to take initiative”. Some changes might seem small, but they have a big impact in someone’s life. “We create a space in which women can enact change in society”, Cosmina states.

Besides her engagement in the two networks, Cosmina also holds a full-time position. She works for the public sector, as a strategy adviser for the EU, on open data and electronic government. “My current project deals with developing strategies for public institutions throughout the EU member states on how to publish data they have collected. I travel a lot and hold workshops on this topic in various EU countries and I write a lot of policy reports and studies. What I have learnt at the Hertie School helped a lot, I was able to use many of the relevant tools that my studies provided me with”, Cosmina tells. Her secret to deal with everything is her time management strategy: “I had to learn that the world will not stop spinning if I miss a deadline or answer emails later on”, Cosmina shares. This makes a difference when you have five different email accounts like her. “You have to learn to set priorities, filter and quickly assess the urgency of an issue”, she says. In any case “one needs to communicate, since the others do not know what you do not tell them”. This has helped in both work and private life.

Cosmina carries with her the wisdom of her great-grandmother, who taught her about patience. “She gave us principles to take in life, to make us into a good human being”, Cosmina remembers her role in raising her and her sister, while both parents were working long hours. She also recalls her parents watching a lot of news. “I liked politics, diplomacy, hearing about negotiations between countries and treaties signed, but I also had a weak spot for mathematics and literature”, Cosmina recalls. She eventually studied Public Relations and Advertising in Bucharest. Soon enough, Bucharest lost Cosmina for Berlin, where she had relocated to study Political Science at the FU. Cosmina had pursued an internship in Luxembourg, at the European Parliament, after her Bachelors. While looking into the job market in Brussels, Cosmina found the Hertie School of Governance by chance – which brought her back to Berlin, to which she felt more connected to than Romania. But for Cosmina, chance plays an important role: “I believe in fate, many nice things in life happen by chance,” she says smiling. It was a class of Electronic Government at Hertie that got her her current job, with a guest speaker from Capgemini. She still works there today, as a Senior Technology Consultant.

Cosmina’s goal is “to keep the networks going”, by motivating the members to take action and organize sessions on their own. “Creating a space for discussion is what the two networks are all about”, she says, they help individually and collectively reflect on how to best create change in society. She is now in Schöneberg after moving from Charlottenburg. “This neighborhood is representative of Berlin – a great mix of international cuisine, innovation centers, small firms’ offices and co-working spaces”, Cosmina says. She has many friends living around the corner, for whom she does not fail to find time. “I get my energy from good-willed people, a good coffee in the morning, and sweets throughout the day”, Cosmina shares, “I part easily from toxic people”. Learning to prioritize is a lifelong lesson, but it needs to be reinforced by the courage to pursue change and the wisdom to leave some things behind.