Harmke Kruithof, originally from the Netherlands, has made Brussels her home. She is working for the European Commission in the Directorate-General for International Cooperation and Development (DG DEVCO), in the migration and employment unit. She is a graduate of the Hertie School of Governance. But to get here she first worked and studied in different parts of the world, building her expertise in the field of international development and humanitarian assistance. While she was growing up, Harmke lived abroad in England and France, and learnt early what big assets foreign languages are. “Today people assume you will be fine with English everywhere, but this is often not the case, and neglects to recognize how languages shape identity and culture,'' Harmke says, “language is a key part of connecting to a new community, to a new culture, whether with your neighbour, the taxi driver or your co-worker. Speaking the local language - even if at first just the basics - is essential in diplomacy, to build stronger and deeper relationships'', she explains. With a Fulbright Scholarship programme, Harmke studied at University of Oregon (2007-2008), focusing on International Relations, US Politics and US History. After one year, she moved back to the Netherlands to pursue a degree in Liberal Arts and Sciences at the University College Utrecht, majoring in Politics and Modern History. As her capstone project, she did a field course and internship in Kenya. “My basic (and very bad) Swahili came in handy at the local vegetable market!”, Harmke recalls, smiling. 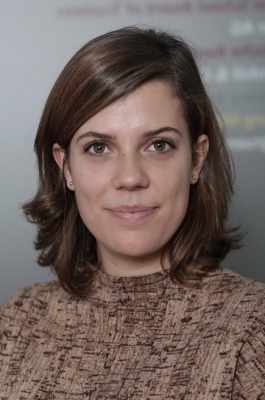 A thread of Harmke’s student life was her engagement in her student communities. In Utrecht, she was an elected member of the student association board (UCSA). At the Hertie School of Governance, she was elected as a student representative and was a member of the student board. It was at that time Harmke joined the Hertie Gender Equality Network / HGEN (former Women Leadership Initiative), founded by Cosmina Radu and jointly run with Florien Kruse. She took a proactive role here as well: “My focus was on strengthening connections between the members themselves and with other networks of the Hertie Foundation”.

The fellows & friends networks cooperated with and learned from each other by organizing joint events on ‘Women in Social Entrepreneurship’ and collaborating with Hertie students on the ‘Cracking the Ceiling’ conference. The networks continue to inspire each other. “Feminism was an integral part of my upbringing. Nevertheless even if this wasn’t the case at home, in most professional or other personal contexts, gender equality is still elusive or… a work in progress”, Harmke tells. HGEN set out to make a contribution to promoting gender equality at the individual and organizational level. “We organized panel discussions with mid and senior career level women, from academia, politics and social entrepreneurship to inspire women who had just started their careers”, she tells. “We explored work-life balance models, equal pay, and how to negotiate a promotion.”

“At the Hertie School of Governance you can look at different fields in a practical way”, Harmke tells about her motivation to apply for the Master of Public Policy (MPP) in the first place. “My bachelor of Liberal Arts and Sciences, it was more theoretical, but I wanted something more applied to the real-life policy problems”, she shares. Harmke’s attraction to Hertie derived from the multi-disciplinary subjects, the faculty with different backgrounds, the students from different fields, such as biology, sociology or economics, the international debates and international workshops, which led her to Berlin. But Berlin did not hold on long to her, “I wanted more professional experience, so I took time off studies to work in The Hague and in Ethiopia, which turned out to have been a good choice, it has brought me to where I am today”, Harmke tells about her professional semester, working for Democrats66 (a political party in the Netherlands) and the Dutch Ministry of Foreign Affairs.

Harmke works today on migration and forced displacement, including refugees, internal displacement and human trafficking, with a geographic focus on Asia and the Middle East. “I have been in Brussels for a while now, it’s a really great place to work and has much more to offer in terms of food, music and art than people realize”, she says. Her work at the Commission began with the European Commission Blue Book traineeship, at DG ECHO. She is currently debating what her next move will be, whether to stay in Brussels on a longer term or to move abroad once again.

Harmke has friends from the Hertie circles in Brussels, where there is a wide Hertie community which meets regularly over drinks to discuss the latest at the office and in EU politics. When travelling for work she often meets with other Hertie fellows, whether in Kiev, Geneva or Washington D.C. “My father always told me to do something in life that makes me happy and to find a way to contribute. I’ve been very lucky to find it”, Harmke tells, and his advice has been her Northern Star.

“I get a lot of energy from being part of my networks”, she shares. After having left the ff network, she got more involved in the Democrats66, where she is now a member of the board. “After the cross-road events from 2016, it was important for me to get more involved in the Politics, in campaigning, participating in and shaping ongoing political discussions”, she shares. “If you want change, you have to get involved. But we all have so much time and energy each day, right? Yet, to me, when you find something that drives you, it's like a two-way street. You put a lot of energy in and get a lot of energy out of it, too. That's when it's right”. Harmke finds inspiration in work which has an impact, and the process is important, too. She is a connector.