After travelling extensively, Shaarad Sharma, a graduate of the Hertie School of Governance, has learnt first-hand the advantages of belonging to and fostering networks. So, when he was invited by the Hertie Foundation, to set up a network within the fellows and friends programme of the foundation, the Hertie International Development Network was born. Shaarad co-founded the network together with other fellows. They kicked it off with an event in London on new economic thinking and international development, where they had invited professors and practitioners from these fields as speakers. “This event showed what you can do with a growing network”, Shaarad shares. “After the event people got to know me”, he says. He was subsequently invited to join the European Forum Alpbach in Austria, a “festival of ideas”, is how he describes it. “Jeff Sachs was there”, he says, “I was a discussant”. Valuable collaborations were born from conversations at the forum. 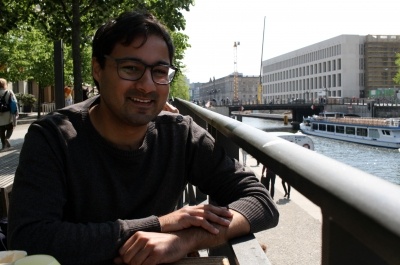 Having both parents be doctors, Shaarad was expected to become a doctor, too, a path he considered for a while. He eventually decided to pursue a Bachelor’s degree in Economics and International Development at the University of Bath. During his bachelor, he worked in Africa, with CARE Tanzania’s Health Programme. The world was never too big for Shaarad, and he continued his career path in Bangalore, India, where he worked for a governance institute, the Public Affairs Centre. Before attending Hertie School of Governance, for a dual degree with Columbia University, Shaarad further built his expertise with a consulting firm, Adam Smith International, a job which also implied travelling and advising governments in the region whilst based in Nairobi, Kenya. In Zimbabwe for instance Shaarad had worked closely with the prime minister. He focused on improving public service delivery, systematically mapping peoples experience with public services, and their engagement with the government.

This is the work that particularly motivated Shaarad to apply for Hertie School of Governance in the first place, “to improve the public service delivery and how you deliver policy; things are connected at the village level”, he shares but public services are not necessarily set up to reflect this. Joining Hertie was quite an intense period, “I travelled up to a day before beginning my Master at the Hertie School”, Shaarad reveals. But one which was well worthwhile, “I liked the idea of being part of developing the programme”, Shaarad tells. “We had a cohort from all around the world, everybody was deeply passionate”, he recalls. While at Hertie, he pursued an internship with Prof. Alina Mungiu-Pippidi on metrics good governance indicators, which was “quantitative heavy, incredibly technical”, Shaarad recalls. He was also involved in the student life and coordinated the student cinema politica, showing independent political documentaries from across the world. “Berlin feels like home”, Shaarad says.

There is history everywhere here. I studied the Cold War and I am impressed by the remarkable way Germany handled itself post World War

Like many Hertie students, Shaarad decided to go for a second year at Columbia University in New York. There he worked on a Capstone project, as a Member of a consulting team to the Kazakhstan National Agency for Technological Development, which was directly linked to the job he took on after the study. His consulting work was focused on developing strategies for the government in the high-tech sector and startups, with the purpose of developing their ability to further develop by themselves. Today, Shaarad is still working with governments across the world, at the Royal Academy of Engineering, supporting the development of technologies and engineering capacity for sustainable development.

The first fellow & friends workshops of Shaarad’s network, funded by the Hertie Foundation, focused on adaptive social policy. “Different policy areas are increasingly intertwined, you cannot have a social policy without considering what is happening in labor, education, automation, technology”, he says. “How can you be more proactive in your politics knowing the interconnections?” was at the core of these workshops. “There is so much space for innovation”, Shaarad says. “In my job I work with 18 developing countries, to build their technology and their own capacity, to facilitate their access to international knowledge expertise.” “I want to see the technological revolution reflected in the curriculum of the Hertie School, this is currently changing the world, this would better prepare the students for tomorrow”, Shaarad says. The members in the ff network share their expertise, learn from experts and Shaarad has a pivotal role in fostering this exchange.